Wonders of the underworld: Caves of Thailand

After my recent trip to Thailand, I was amazed with its beautiful nature and saw a big potential for adventure. With limited time I explored what was available to me in the surrounding islands. Yet the thing I wanted the most was hard to reach, Caves. Thailand features numerous caves, many of which are considered holy places both in legend and by monks who often use them as places for Buddhist meditation. Consequently, it’s not uncommon for temples to be located near impressive caves or for Buddhist statuary to be installed within them. Furthermore, Thailand’s caves feature some spectacular natural rock formations, including stalactites and stalagmites, as well as pre-historic cave paintings from ancient peoples who once resided in Thailand. 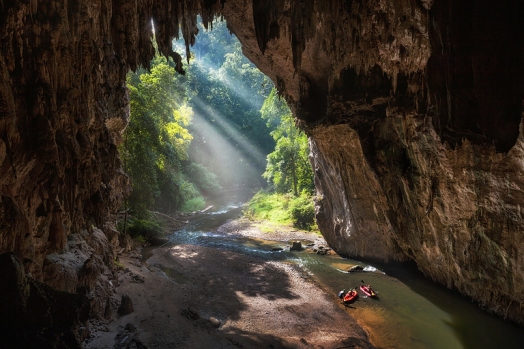 Some of the scenes captured illustrate the sheer size of the caves which can contain vast pools of water, high-rise columns and smooth rock domes. Here is a glimpse into some of Thailand’s breathtaking caves staggering beneath the Earth’s surface taken but the talented Australian explorer and photographer John Spies.

Tham Lod (length 1,666m) is a cave system in Mae Hong Son region of Northern Thailand. The Nam Lang River flows through the cave which is filled with stalactites and stalagmites.
The Lod is a natural limestone cave system, its main feature is the freshwater stream which runs through the middle of the cave for about 200-300 meters. Inside it’s walls are covered with massive formations and columns over 20 meters high. The cave is also home to large numbers of bats and swifts. In Tham Lod and other caves nearby teakwood coffins have been discovered which are thought to have been carved by the Lawa tribes people thousands of years ago.

As the light changes the water and rock formations in the Tham Lod cave take on different hues. There are thousands of fish in the cool underground water

John Spies explores the Tham Lod cave in Pang Mapha, Thailand. It is one of hundreds of caves located in this region and those visiting before sunset can watch the birds entering and the bats exiting in their millions. 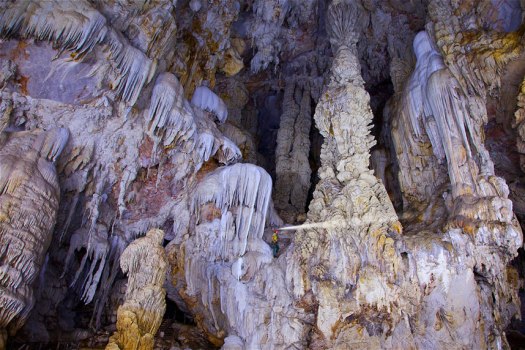 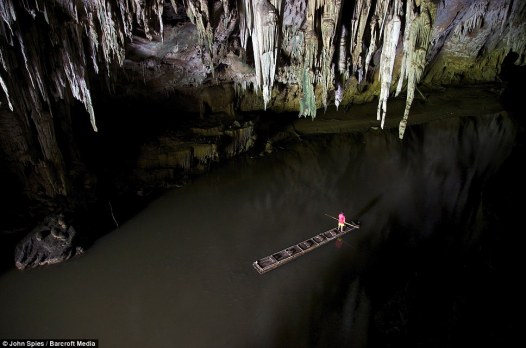 Also known as White Cliff. A steep, sealed track descends to the Lahu village of Ban Pha Puek which is on a ridge in front of white cliffs. A good walking trail leads down the cave entrance 200m further on. A small perennial stream runs off impermeable rocks and soil to sink beneath an enormous entrance which is at least 100m high. The enormous entrance gives access to a vast chamber floored by huge, dangerous and unstable talus blocks. The roof, formed by a series of bedding planes and dipping steeply westward, has massive stalactites.
Tham Pha Puek was visited by the Australian expeditions between 1983, with the cave surveyed and extended in 1986, 1988, 1990 and 1992.

Also known as Snake Mountain cave. It is located in Kanchanaburi province. It houses the world’s tallest cave column a monolith that stretches to a staggering 62 meters. The downward falling stalactites take on a striking orange color.

A majestic view of Tham Lum Khao Ngu (Snake Mountain cave) which houses the world’s tallest cave column a monolith that stretches to a staggering 62metres. the downward falling stalactites take on a striking orange colour.

The cave is described from the swallet to the resurgence. The swallet entrance is 5m high and wide. From the entrance to the Green Lake, where the stream sumps, is 4.15km of passage generally 3-4m high and wide with the roof dipping to a minimum of 1.5m in one place.  The stream inside the cave is habitat to eyeless and colorless fish that live in dark environment. This cave is suitable only for adventurous tourists.
First entered in 1986 by the Australians, the cave was originally explored as far as the Green Lake from the resurgence. With the discovery of the sink entrance Kerry Hamilton and Attila Vrana made the first 8.4km long through trip in the same year. The southern tributary and high level passages were explored and surveyed on the next Australian expedition in 1988. The northern waterfall tributary was explored in 1992. There is still great potential to extend this cave. 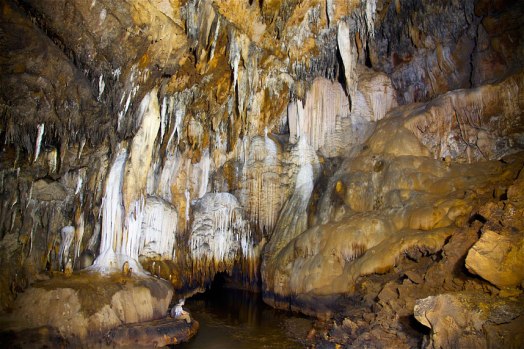 Intrepid adventurer David Pierce sits back in wonder to take in the Tham Mae Lana, flowstone in the main stream passage in Pang Mapha, Thailand.

Tham Nam Lang is the resurgence cave draining the Nam Lang polje, a complex depression 400 sq km in area. Despite its size the cave was apparently not well known locally, being about 4km from the nearest village. The entrance chamber, 50m wide, 30-40m high and 80m long, has a large boulder slope that descends down to the river. The river passage can be followed upstream to the limit of daylight over 200m into the cave.
Tham Nam Lang was first visited by the Australian expeditions in 1984 who explored the first 3.5km. In 1985 the cave was extended to 6.7km and finally in 1986 the upstream choke was reached on an epic 53 hour trip. The upper levels were explored in 1988. The cave is normally accessible only during the dry season and the water is cold and often deep until February or March.

Rays of light flood a large natural entrance to this cave in the northern district of Pang Mapha in Thailand. Dave Pierce stands on a ledge at the entrance to the Tham Nam Lang cave in Pang Mapha, Thailand.

This resurgence cave is the only known rising for the extensive karst plateau between the Mae Nam Lang and the Mae Nam Pai. Downstream of the spring below the entrance the stream has built an extensive travertine delta 300m wide, falling into the Mae Nam Khong over attractive waterfalls 3m high.
Tham Susa was first visit by the 1984 Australian expeditions and surveyed as far as the waterfall in 1985. The waterfall was scaled by the 1990 Australian expedition. Although a rope was left on the Second Waterfall a lot of effort will be needed to visit the upper stream way again. Carbon dioxide pervades the whole length of the river passages. 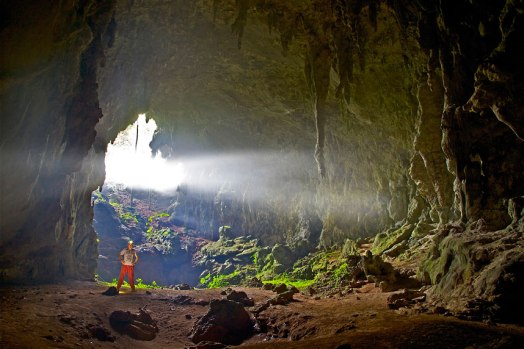 John has discovered caves never before visited by humans and his expertise in the field has led him to work with Sir David Attenborough on his acclaimed Planet Earth BBC television series. John Spies stands at the entrance chamber of Tham Susa in Pang Mapha, Thailand, a filming site for BBC’s Planet Earth 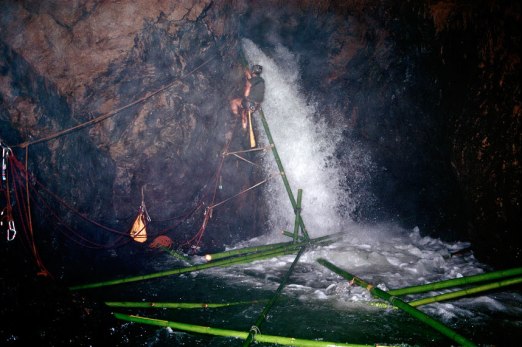 In 2005 the whole cave was under the protection of the Thai military and closed to the general public. A wooden and bamboo walkway leads into the cave for the first kilometre from the sink entrance and electric lighting has been installed.
The cave is most conveniently traversed from resurgence to sink. At the resurgence there are two entrances, one active and the other a roof hole. The stream passage makes great sporting caving, usually with a gravel bed and no deep water, some fine decoration and the occasional tight or low wet section for variety. Elsewhere it is mostly walking in passages up to 10-15m high and wide with frequent sections where the roof is only about 1.5m high. A pleasant breeze blows through the cave, becoming very strong in one or two constrictions. During the 1992 Australian expedition a small tributary was followed, increasing the length of the cave to over 4 kilometers.
The last few meters are over increasingly large boulders and up small waterfalls to a final climb emerging at the bottom of a collapse feature. From here the return walk to the road through attractive forest takes about 30 minutes, passing some small caves en route.
While this cave has been known locally for a long time it seems likely that in 1985 the APS was the first to make a through trip. 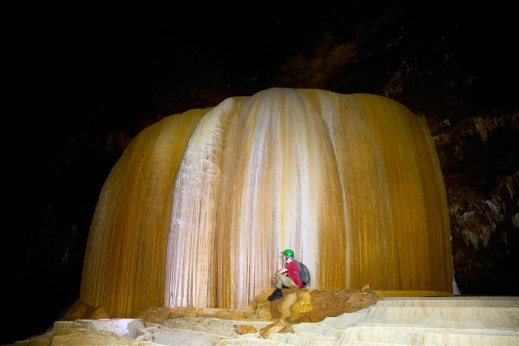 ← ‘Pearl of Dubai’ A Waterpark For Every Diver
Decathlon: Your personal guide to well-being →